Turn off Fairfield-Leopold Downs Road at the GPS co-ordinates and follow the unsealed road for approx 1 km until you reach the campground.

The Lennard River runs through Windjana Gorge in wet weather, but forms pools surrounded by trees and shrubs during the dry season. The 3.5km long gorge cuts through Napier Range: part of the ancient Devonian limestone reef that can also be seen at Geikie Gorge and Tunnel Creek. Freshwater crocodiles bask in the pools, while fruit bats and corellas roost in the waterside trees.

Walks include the Gorge Walk, which begins at the camping area and winds through the gorge for 3.5km each way. The short Time Walk takes a look at marine life forms fossilised within the limestone of the gorge walls. The Savannah Walk along the south-eastern wall showcases the plants and animals of the woodlands.

This pleasant campground has tent and caravan sites and a nearby airstrip caters for people who want to fly in.

The campground has good facilities but no powered sites are available and entrance and camping fees apply. It also has bore water than you must boil or treat before drinking.  It is a great base from which to explore Windjana Gorge.

The limestone through which the gorge has cut was once part of an ancient barrier reef that teemed with ancient life forms. It formed around 350 million years ago, in the Devonian period, when a large part of the Kimberley was covered with a tropical sea. Perfectly preserved within its rocks are amazing fossils of a huge diversity of marine animals, including the world-famous Gogo fish, named after nearby Gogo Station.

The deep, moist soils of the river bank support the tall broad-leaved leichardt tree, native figs and the paper-barked cadjeputs. These trees also provide shelter from the hot sun for many waterbirds, a colony of fruit bats and a large group of corellas. Freshwater crocodiles can often be seen in the pools.

A four-wheel-drive is recommended to access the park. The park is closed during the wet season as the roads are inaccessible. 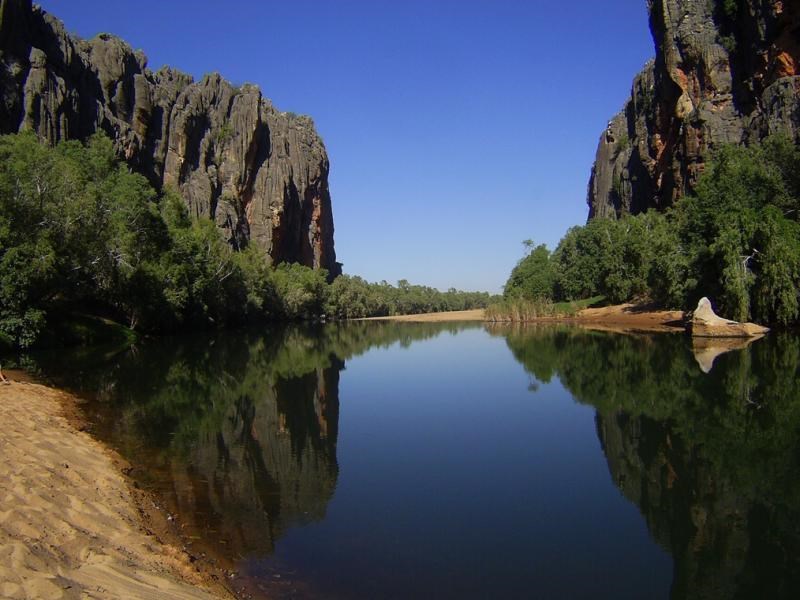 Below you can add images related to Windjana Gorge National Park.